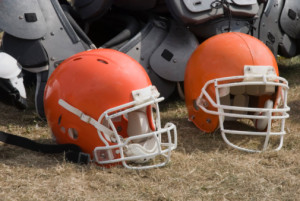 A new study finds that football helmets in use today don’t do much to protect against concussion or traumatic brain injuries (TBI), specifically regarding hits to the side of the head.

The National Operating Committee on Standards for Athletic Equipment (NOCSAE) developed the system to measure effectiveness of helmets called the standard drop test system, which involves mounting a football helmet on a synthetic head model and dropping it a total of 16 times onto a firm rubber pad, including two each from a height of 60 inches onto six locations at ambient temperatures.

Researchers from the Florida Center for Headache and Sports Neurology and the Florida State University College of Medicine slightly modified that system to include a crash test dummy head and neck, which generated a more realistic impact. They then tested 10 popular football helmet designs for strength and safety when exposed to damaging impacts similar to a football tackle.

“Alarmingly, we learned that football helmets, on average reduce the risk of traumatic brain injury by only 20% and those that offer the least protection are among the most popular on the field,” said study co- author Dr. Frank Conidi, sports neurologist and director of the Center. “While football helmets provide excellent protection from linear impacts — those leading to bruising and skull fracture — they offer little or no protection against rotational forces, a dangerous source of brain injury and encephalopathy.”

The findings of the study released today will be presented in April at the American Academy of Neurology’s 66th Annual Meeting in Philadelphia.