How Video Games Can Improve Your Health, Attention and Skills 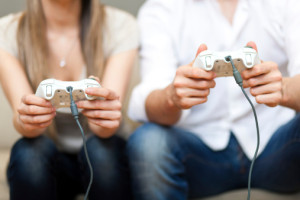 Lots of news in the past few days about the health benefits of playing video games.  That’s right, parents, a little bit of Flappy Bird actually may be good for Junior.

First came news that “playing a stroke video game for 15 minutes may improve actionable stroke knowledge of children,” according to researchers from Columbia University Medical Center in New York.

Over 200 4th and 5th graders were recruited to play a game called Stroke Hero, which involved navigating “a clot-busting spaceship intra-arterially, shooting down clots that occlude the passage of blood to the brain, while avoiding large atherosclerotic plaques on the arterial wall,” according to the study published in the American Heart Association’s journal Stroke.

After playing the game, the kids were tested on their stroke knowledge.  Researchers found that “there was significant improvement of stroke symptom composite scores, calling 911, and all individual stroke knowledge items across the testing sequence,” they said. “Interestingly, we observed further increases in knowledge of 3 of 5 stroke symptoms (sudden imbalance, sudden facial droop, and sudden headache).”

Separate research showed the value of video games for those with dyslexia.  Playing action video games, specifically, was shown to help improve shifting attention between audio and visual cues, according to a study published in Current Biology.

People with dyslexia often experience “sluggish attention shifting,” which is a difficulty in shifting attention level from the person you are speaking to (visual cue) to the conversation occurring behind you (audio cue).  “We found that shifting attention from visual to auditory stimuli is particularly difficult for people who have dyslexia compared to good readers,” said study author Vanessa Harrar of the University of Oxford.

So what is a possible solution to poor attention shifting?

“We propose that training people with dyslexia to shift attention quickly from visual to auditory stimuli and back-such as with a video game, where attention is constantly shifting focus-might also improve literacy,” said Harrar. “Action video games have been shown to improve multitasking skills and might also be beneficial in improving the speed with which people with dyslexia shift attention from one task, or sense, to another.”

The New York Times today published a profile of a lab at the University of California, San Francisco that is devoted to finding answers to neurological disorders through the use of video games. “By scanning the brain during game play, we are hoping to discover the areas of your brain that are weak, and then guide a more powerful experience to help improve how your brain works,” said Dr. Adam Gazzaley, associate professor and director of the university’s Neuroscience Imaging Center.