Healthcare.gov Meets Fix Deadline, But Is It Better? 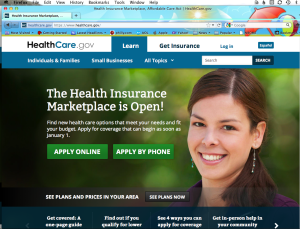 For the first time since its mangled Oct. 1 launch, users can now go to the federal government’s insurance enrollment website and get detailed information about the costs and benefits of health plans in their county without first enrolling.

Before this week, the “window shopping” feature on healthcare.gov showed only average monthly premium prices until the user completed a lengthy online application. Under the system unveiled Monday, users can get information on plans available in their county based on their exact age in addition to information about deductibles, co-pays and whether their doctor or prescription drugs are covered – before they complete an application. The new data also includes details on what benefits are covered.

The window-shopping prices do not account for any federal subsidy, which can be calculated only by filling out an application and answering about two dozen questions about income and household size. Subsidies are available to individuals with incomes between the federal poverty level of $11,500 and four times that level, or about $46,000.

Still, the more detailed information will help people who have had trouble completing their applications on the website, which handles enrollment for the residents of 36 states. Many state-run insurance exchanges included such a feature when they launched on Oct. 1.

“This is one more way we can help people get ready to enroll,” said Julie Bataille, spokeswoman for the Centers for Medicare & Medicaid Services.

On Monday, traffic on healthcare.gov was double that of a normal weekday, Bataille said. An estimated 750,000 people had visited the site by 5:30 p.m. and it was on track for well over 800,000 visitors by day’s end. She would not reveal if the site had seen an increase in completed applications since the latest fixes were made to the system Saturday.

The Obama administration said Sunday that it had met its self-imposed goal of having the site work smoothly for most users by Nov. 30. But while many users and navigators reported improvements Monday, others continued to face frustration with the website.

Bataille noted the administration has not yet fixed the problem of insurance companies getting inaccurate enrollment data. But she said the computer bug responsible for 80 percent of the problem had been identified and fixed. Bataille said she did not know how many consumers have been affected by the bug. She stressed that applicants should contact an insurer directly after enrolling on the website to make sure the company had received their payment and enrolled them in coverage.

2013-12-02
PhysiciansNews.com
Share
Previous 5 Things Doctors Can Do Now to Prepare for Meaningful Use Stage 2
Next Why All Doctors Should Be Online: VIDEO