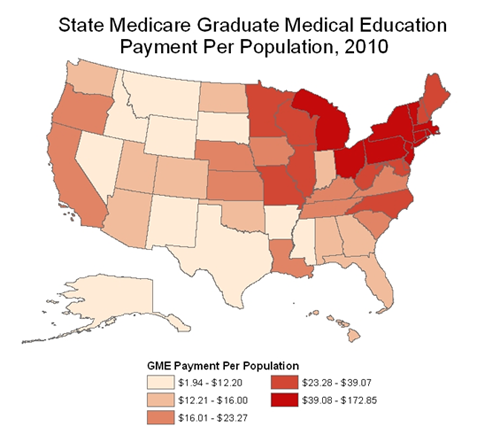 Florida and New York have roughly the same population, but New York has five times as many Medicare-sponsored residency training positions and seven times the Medicare funding graduate medical education.

The numbers give a glimpse into the “imbalance” in how Medicare distributes its $10 billion a year for graduate medical education (GME), according to a study by George Washington University researchers published Monday in Health Affairs.

New York state received 20 percent of all Medicare’s graduate medical education funding while 29 states, including places struggling with a severe shortage of physicians, got less than 1 percent, the study said. Other states at the top of the heap in funding are Massachusetts, Rhode Island, Pennsylvania, Michigan and Connecticut, the study found. Each of these states gets more than $71 in funding per each resident compared to $14 for Florida and $11.50 for Texas. At the bottom is Montana, which gets $1.94 per resident.

The distribution is important because while some medical residents move elsewhere after training, most practice near where they train. Doctors enter medical residency typically for three or more years after they graduate from medical school.

“Such imbalances play out across the country and can affect access to health care,” said lead author Fitzhugh Mullan,  a professor of medicine and health policy at GW.

New York received $2 billion in federal GME funding, according to the study. At the same time, the study found Florida received one tenth the GME funding ($268 million) and Mississippi, the state with the lowest ratio of doctors to patients in the country, received just $22 million in these federal payments.

The formula that determines how such dollars are distributed was set up decades ago and does not account for population growth, Mullan said.

“Due to the rigid formula that governs the GME system, a disproportionate share of this federal investment in the physician workforce goes to certain states mostly in the Northeast,” he said. “Unless the GME payment system is reformed, the skewed payments will continue to promote an imbalance in physician availability across the country.”

But changing that balance is politically difficult because states that have the largess in funding don’t want to give it up to help states with less money, he said. Hospitals count on the funding, Mullan said.

Dr. Atul Grover, chief public policy officer at the Association of American Medical Colleges, defended the existing formula and said his group, which represents teaching hospitals, wants Congress to increase funding overall. But at a time when the federal government is focused on cutting the deficit, he concedes that is unlikely to happen soon.

Grover says the GME money analyzed in the study is somewhat misleading because it includes funding for hospital burn centers, trauma centers and treating sicker patients.

Grover said growing states with fewer residency training positions will have a harder time keeping up with demand for physicians. He said some big states such as Florida and Texas don’t have enough residency slots to train all graduating medical students.

The Affordable Care Act does little to change how the residency positions are allocated, though the law called for reallocation of unused slots. Last year, about 50 of the more than 26,500 positions went unfilled.

Medicare funding makes up about two-thirds of the $15 billion spent on graduate medical training each year. The rest is largely paid for by hospitals.