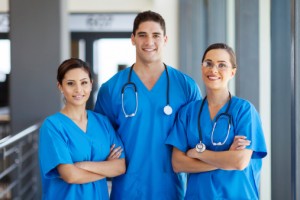 In the face of projected doctor shortages and debate about the future of medicine, a record number of students applied to, and started, medical school this year.

About 20,000 students enrolled in medical school in 2013, around 2.8 percent more than the year before, according to the datadistributed by the Association of American Medical Colleges on Thursday. First-time applications were also up by almost 6 percent.

“We haven’t seen a level like this since 1996,” said Darrell G. Kirch, president and CEO of the organization.

He said four new medical schools, and some expanded class sizes, were responsible for the growth. Kirch also said the number of first-time applicants spoke to the sustained interest in the medical field.

Meanwhile, osteopathic medical schools saw a continued surge in their new student pool, with an 11.1 percent growth in enrollment, according to the Association of American Colleges of Osteopathic Medicine. These students, who graduate with a Doctor of Osteopathy, or D.O. degree, practice in the same capacity as M.D.s.

“We’re enjoying the highest increase in applications of any other health profession in the U.S.,” said Bryan Moody, director of enrollment management at Marian University College of Osteopathic Medicine, one of the four new D.O. schools that opened in the past year.

Moody said the school has looked to recruit diverse applicants with strong academic records, and is hoping to help address a growing shortage of doctors in the surrounding Indiana area, as well as other communities.

And while both Moody and Kirch said they were encouraged by the number of enrollees this year, they acknowledged that there are still questions ahead for the medical profession: Congress has yet to reach a decision on proposals to increase the Medicare budget to support additional residency slots. Without such a fix, medical students could graduate from their programs without a way to continue their training.

Moody said schools are turning to their senators and representatives to advocate for this change, while hospitals look at additional ways to fund the programs.

The biggest lobbying force may be the students themselves.

“The students are clear-headed about this, they’re some of the strongest advocates,” Kirch said.

2013-10-25
PhysiciansNews.com
Share
Previous EVENT: Pennsylvania Physicians To Give Advice on “Docs on Call” TV Program
Next Healthcare.gov Will Work Smoothly By End of November