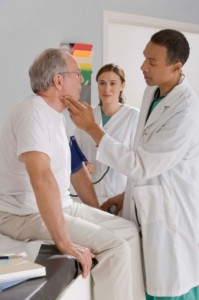 Men ages 55 to 69 who are considering prostate cancer screening should talk with their doctors about the benefits and harms of testing and proceed based on their personal values and preferences, according to a new clinical practice guideline released today by the American Urological Association (AUA). The new guideline, which updates the Association’s 2009 Best Practice Statement on Prostate-Specific Antigen (PSA) was announced during the 2013 AUA Annual Meeting in San Diego, CA. The guideline does not address detection of prostate cancer in symptomatic men, where symptoms imply those that could be related to locally advanced or metastatic prostate cancer.

The new guideline is significantly different than previous guidance inasmuch as it was developed using evidence from a systematic literature review rather than consensus opinion; provides rating and interpretation of the evidence based on randomized controlled trials with modeled and population data as supporting evidence; and develops statements that do not go beyond the available evidence. In developing the guideline, the panel acknowledged that ongoing research (including studies on biomarkers other than PSA) may lead to changes in the guidelines statements, and announced plans to update the guidelines regularly based on new evidence.

The highest quality evidence for screening benefit (lower prostate cancer mortality) was in men ages 55 to 69 years screened at two- to four-year intervals; data demonstrated that one man per 1,000 screened will avert a prostate cancer death over a decade. However, over a lifetime, this benefit could be much greater. Furthermore, there are men outside this target age range (55-69 years) that could benefit from screening because they are at a higher risk of prostate cancer (race, family history, etc.). These men should discuss their risk with their physicians and assess the benefits and risks of testing.

“There is general agreement that early detection, including prostate-specific antigen screening, has played a part in decreasing mortality from prostate cancer,” said Dr. H. Ballentine Carter, who chaired the panel that developed the guideline. “The randomized controlled trials are more mature at this point and there is more data available today than there was in 2009. It’s time to reflect on how we screen men for prostate cancer and take a more selective approach in order to maximize benefit and minimize harms.”

“The best available evidence suggests that following these guidelines will lead to an improved benefit-to-harm ratio,” said Dr. Carter.