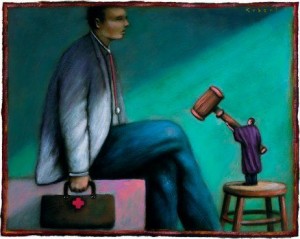 The Association of American Physicians & Surgeons (AAPS) has filed suit in federal court against the American Board of Medical Specialties (ABMS) for restraining trade and causing a reduction in access by patients to their physicians. The ABMS has entered into agreements with 24 other corporations to impose enormous “recertification” burdens on physicians, which are not justified by any significant improvements in patient care.

ABMS has a proprietary, trademarked program of recertification, called the “ABMS Maintenance of Certification” or “ABMS MOC”, which brings in many tens of millions of dollars in revenue to ABMS and the 24 allied corporations. Though ostensibly non-profit, these corporations then pay prodigious salaries to their executives, often in excess of $700,000 per year. But their recertification demands take physicians away from their patients, and result in hospitals denying patients access to their physicians.

In a case cited in this lawsuit, a first-rate physician in New Jersey was excluded from the medical staff at a hospital in New Jersey simply because he had not paid for and spent time on recertification with one of these private corporations. He runs a charity clinic that has logged more than 30,000 visits, but now none of those patients can see him at the local hospital because of the money-making scheme of recertification.

Money-making schemes that reduce access by patients to physicians, as “maintenance of certification” does, are against public policy and harmful to the timely delivery of medical care. AAPS’s lawsuit states, “There is no justification for requiring the purchase of Defendant’s product as a condition of practicing medicine or being on hospital medical staffs, yet ABMS has agreed with others to cause exclusion of physicians who do not purchase or comply with Defendant’s program.” AAPS adds that ABMS’s “program is a moneymaking, self-enrichment scheme that reduces the supply of hospital-based physicians and decreases the time physicians have available for patients.”

AAPS’s lawsuit, which was filed last week in Trenton, New Jersey, seeks declaratory and injunctive relief to enjoin ABMS’s continuing violations of antitrust law and misrepresentations about the medical skills of physicians who decline to purchase and spend time on its program. AAPS also seeks a refund of fees paid by its members to ABMS and its 24 other corporations as a result of ABMS’s conduct.

ABMS defended its MOC program, saying in an eight-page “myths and facts” document posted on its website that the program is “anchored in evidence-based guidelines, national clinical and quality standards, and specialty best practices,” according to MedPage Today.

More than 450,000 physicians participate in the MOC program, which ABMS says is to help assure a doctor has successfully completed a rigorous evaluation process and assures competency. The pool grows by roughly 50,000 physicians a year.

AAPS said every state licenses physicians to practice medicine, and patients have a right to seek care from any of them. The group said ABMS’ work with the Federation of State Medical Boards for maintenance of licensure as a requirement of state licensure was a further antitrust violation.

2013-04-30
PhysiciansNews.com
Share
Previous New Website Will Disclose Payments To Doctors
Next Doctors Must Be Involved in Development of Guidelines