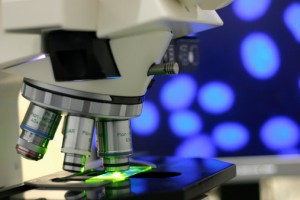 New research suggests that men who are considering their treatment options for low-risk prostate cancer may benefit from additional biopsy testing before making a decision. Based on this research, doctors at New York-Presbyterian Hospital/Columbia University Medical Center are modifying their practices to more accurately distinguish early and low-risk prostate cancers from more aggressive disease.

“Active surveillance” is an alternative to immediate treatment of prostate cancer that allows men with low-risk tumors to monitor the disease with their physician and proceed with curative treatment at a later time, if ever. This approach delays, and may even prevent entirely, the possible side effects of radical surgery or radiation therapy.

There are two important factors for a successful active surveillance program. First is the accurate identification of men with low-risk prostate cancer. Active surveillance should be offered only to men with cancers that are considered at low risk for spread or growth beyond the prostate. Second, once a patient and his doctor choose active surveillance, the cancer must be carefully monitored to recognize if and when treatment is required. Monitoring includes regular blood tests, prostate exams, and repeat biopsies.

A standard prostate cancer biopsy takes 12 samples, known as cores, from different regions of the prostate. In men who have a persistently elevated risk of prostate cancer but have had a previous negative prostate biopsy, up to 24 cores are commonly taken. However, while 24 cores can offer a more accurate assessment, this approach requires more sedation and may increase the risk of complications.

“In about one-third of men who enter active surveillance, a second biopsy performed one year later shows that they are no longer candidates for active surveillance, as the cancer has become more aggressive or extensive. They are then advised to receive treatment. It has been thought that the disease progresses over the course of the year,” says Dr. Sven Wenske, a urologist at New York-Presbyterian/Columbia.

New published research suggests that those men who chose active surveillance and subsequently were thought to have “failed,” or required treatment, a year later should not have been started on active surveillance in the first place. Researchers now think that their cancer did not progress or become more aggressive over the year, but that the initial biopsy may have been inadequate. This finding became apparent after two recent studies conducted in the Department of Urology at New York-Presbyterian/Columbia University Medical Center.

In the first study, published in the November 2012 issue of the journal Urology, researchers retrospectively looked at 60 patients from New York-Presbyterian Hospital who had been diagnosed with low-grade prostate cancer and were considered candidates for active surveillance. All of the men had had an immediate repeat biopsy within, on average, two months after the initial biopsy with, on average, 17 cores. In about one-third of the men, this immediate repeat biopsy revealed a prostate cancer grade that made them ineligible for active surveillance. The men were then advised not to undergo active surveillance, but to consider one of the treatment options, such as removal of the prostate.

Two factors on the initial biopsy result predicted an upgrading of the cancer on the repeat biopsy: the presence of precursor lesions and grade of the cancer. “Interestingly, the proportion, one-third, of patients who are thought to show progression of their disease upon biopsy after one year of active surveillance is the same as the proportion of men in this study sample who showed features on their immediate rebiopsy upon entering the active surveillance program that no longer made active surveillance a viable option. Our suspicion is that these are the same patients, just identified before initiation of active surveillance and referred to appropriate treatment without delay,” says Dr. Mitchell Benson, the George F. Cahill Professor of Urology and chair of the Department of Urology at Columbia University Medical Center.

To effectively identify which men are more likely to fail on active surveillance, doctors should perform an immediate repeat biopsy after the initial diagnosis, taking an increased number of tissue samples, according to Dr. Benson: “The 24-core biopsy offers additional clues to the cancer’s aggressiveness and eliminates nearly all of the one-third of men who would have failed active surveillance at the one-year point. This will better reassure patients and may reduce anxiety about cancer progression.

“Effective treatment options are available, but prostate cancer grows slowly and not every patient requires immediate treatment, making active surveillance a valid option for many men. Therapies that may cause significant side effects, such as urinary incontinence or erectile dysfunction, could be delayed or avoided entirely. Though treatment may eventually become necessary, through close monitoring of the cancer, quality of life could be significantly improved and maintained without risking significant progression of the cancer,” adds Dr. Benson.

A separate study, published in the December 2012 issue of the Journal of Urology, showed that during active surveillance, repeat biopsies do not need to be performed on the transition zone of the prostate unless the cancer was initially found in that zone. The majority of cancers originate in the peripheral zone of the prostate and only approximately 10 percent in the transition zone. “This may help reduce the number of biopsies needed to be taken, thereby reducing side effects and complications,” says Dr. Wenske.

Prostate cancer is the most commonly diagnosed cancer in American men, affecting one in six men over their lifetime, and the second leading cause of cancer death.