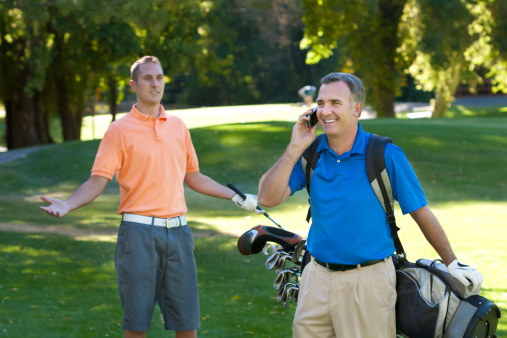 According to a study published in the scientific journal Plos One, merely listening in on someone else’s one-sided cellphone conversation can be more distracting and irritating than regular two-sided eavesdropping.

To test their theory, researchers told college students they were participating in a study examining the relationship between anagrams and reading comprehension.  That part of it was a ruse.  While the students worked on the assignment, either one examiner made a fake, scripted, one-sided cellphone call or two examiners had a live, two-sided conversation.  According to the researchers:

Veronica V. Galván, assistant professor of psychology at the University of San Diego and the lead author of the study, told the NY Times that such conversations are so irritating because the brain is trying to fill in the blanks. “If you only hear one person speaking, you’re constantly trying to place that part of the conversation in context,” Dr. Galván said. “That’s naturally going to draw your attention away from whatever else you’re trying to do.”

One possible explanation as to why these conversations can be so annoying is the inability of the bystander to get away from the conversation:

Research has shown that bystanders in situations where they are not free to leave (for example, waiting for or using public transportation) often find cell phone conversations annoying. Other research investigating the effects of lack of control have shown that lack of perceived control can, in turn, lead to an increase in stress responses.

Galván told TIME that her findings could shed light on multi-tasking behaviors in general. “If people become absorbed in an overheard conversation and were paying attention to it, then performance on whatever task they were working on would suffer.

2013-03-14
PhysiciansNews.com
Share
Previous ADHD Meds Should Not Be Given As ‘Study Drugs’
Next Match Day Results: More Primary Care Doctors Than Specialists