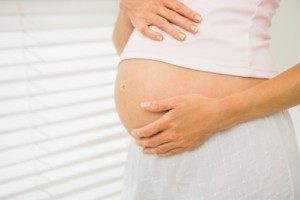 This is an unfortunate and real case study of medical ethics and basic morality.  Crystal Kelley was hired by a couple to be a surrogate.  At 21 weeks, ultrasound showed the female fetus to have a cleft palette, a cyst on the brain, and possibly Down syndrome.  Then things got bad.

After getting lawyers involved, Kelley leaves her home state of Connecticut, which grants legal rights to biological parents in surrogacy, for Michigan, which gives parental rights to the birth mother.

The parents had their own attorney, who informed Kelley that the surrogacy contract she signed required her to have an abortion in the case “of severe fetus abnormality.”  The parents were going to sue for their money back plus expenses for medical and legal bills.  It was then that Kelley learned the contracted mother was not the biological mother.  The parents had used an egg donor with sperm from the original, contracted father.

Now that mom was out of the picture, dad decided to end the fight and Kelley was free to pursue an adoption.  Ultimately, Kelley found an adoptive family for the baby, who was born with holoprosencephaly, where the brain fails to completely divide into distinct hemispheres; a cleft palate; and a hypoplastic right ear, from which she cannot hear.

There are so many ethical issues to consider. It’s not a simple pro-life, pro-choice issue.  Pro-lifers may applaud Kelley for refusing the abortion, but abortion rights allowed the whole process to commence in the first place.  As Dan O’Connor — a research scholar and a member of the core faculty at the Johns Hopkins Berman Institute of Bioethics — said on CNN.com:

Those who seek surrogacy should understand that it is only possible because we believe in a woman’s right to choose. I don’t for a moment wish to underestimate the needs and desires of those couples, but I do think it is important for us to recognize that, as an ethical issue, a woman’s right to control her body far outweighs anyone’s rights to have the child they want.

No one can contract with a woman to have an abortion. Under any circumstances. For any reason. Never. A woman controls her body and no one can make her do anything she does not want to do in terms of medical intervention with her body no matter what she has said before, signed or promised. The lawyer who tried to coerce and threaten Crystal Kelley to have an abortion should be subject to loss of his license to practice law. Any surrogate agency which conveyed an offer of money to encourage an abortion is guilty of at best bribery and an attempt to crassly manipulate a vulnerable woman. And any surrogacy agency that sticks abortion language into its contracts is guilty of gross misconduct.

But Caplan makes an important point when considering the generosity and altruism of women in Kelley’s position: “Surrogacy for money is about money — not love, or help, or altruism or doing good.” Issues of morality become muddled — including views on abortion — when you consider that once money changes hands, this becomes a business and legal transaction.  Each side needs proper representation.

Caplan also says “we need legislation that makes it absolutely clear that if you hire a surrogate you will legally be bound to accept and raise any child that results.”

What are your thoughts?