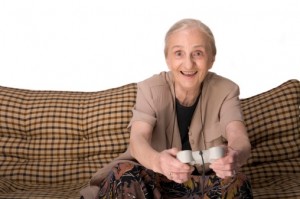 Researchers tested reading and attention skills in two groups of children with dyslexia before and after they played action or nonaction video games for nine sessions of 80 min per day. They found that “playing action video games improved children’s reading speed, without any cost in accuracy, more so than 1 year of spontaneous reading development and more than or equal to highly demanding traditional reading treatments,” according to the study published in Current Biology.

“The correlation between attention improvement and reading improvement was very high,” said the co-first author of the study, Simone Gori, a postdoctoral fellow at the University of Padua, to the NY Times. “The change in attentional abilities translates into better reading ability.”

In the second study, researchers found that older adults who play video games report higher levels of emotional well-being. Researchers surveyed 140 people aged 63 and older, with an average age of 77, about their video game habits.  60 percent of the group was determined to be either an occasional gamer or regular gamer (once per week).

According to the paper published in Computers in Human Behavior, those who played even occasionally reported greater well-being, while “those who did not play video games reported more negative emotions and a tendency toward higher levels of depression.” The authors conclude that playing video games serves as a “positive activity associated with successful aging.”