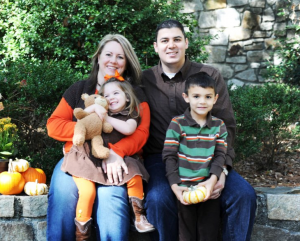 More than 100,000 people have joined a fast-growing campaign asking the insurance giant Coventry Health Care to cover a life-changing surgery for 5-year-old Carson Rubin. Carson was born with a rare disease that left him legally deaf, and the surgery could allow him to hear in time to start Kindergarten.

“When you pay for insurance, you expect the things you need the most to be covered,” said Shay Rubin, Carson’s mom, who started the popular petition on Change.org. “We were truly shocked that Coventry Health Care refused to cover Carson’s cochlear implant surgery and when we learned that the company had recently posted record revenues, it just made us furious that they would do this to Carson and other children like him.”

Carson suffers from auditory neuropathy — a condition that causes him to hear deafening heavy static that increases with noise levels around him.  While his doctors say he’s a great candidate for cochlear implants, or “robot ears” as Carson calls them, Coventry has denied the family the coverage Carson’s doctors say he needs.

“We’re so thrilled to see thousands of people signing our petition on Change.org and demanding that Coventry cover this surgery for Carson,” Shay added.

According to the U.S. Food and Drug Administration, over 90% of commercial health plans in the U.S. cover cochlear implant surgery.  Coventry Health Care of Georgia remains in the small percentage of insurers who don’t, despite having been acquired by Aetna–a company that does cover the surgery–mid-last year.

“The surgery would change his life,” said Brian Rubin, Carson’s dad, to ABC News. “He’s never been able to interact with other children. When he goes to birthday parties and school functions, he’s always left out.” Brian said that they’re trying to schedule the surgery for the near future, even though they probably won’t have the necessary funds. They have raised a few thousand dollars so far.

Supporters of Brian and Shay’s campaign have flooded their petition page with personal comments about their own experiences with the life-changing surgery.  Meredith Wakeman from Martinez, CA said, “My son is deaf and has bi-lateral cochlear implants covered by insurance. His life would be so different without them. Carson should be allowed to hear, the sooner the better!” Robin Fennessy of Alexandria, VA commented, “Coventry HC of GA can cover Viagra, but not a child’s ability to hear. Yeah. I’m on board!”

Each signature on the Rubin’s petition sends an email to executives at Coventry Health Care, Coventry Health Care of Georgia, and Aetna. “Very few campaigns on Change.org reach 100,000 signatures in such a short amount of time” said Jon Perri, Deputy Director at Change.org. “People are clearly upset about what the Rubin family is going through, and because of Brian and Shay’s petition, they have the opportunity to actually do something about it.”

2013-02-28
PhysiciansNews.com
Share
Previous Texting the Doctor? There’s An App For That
Next Sequester’s Effect on Doctors, Patients, Health Care