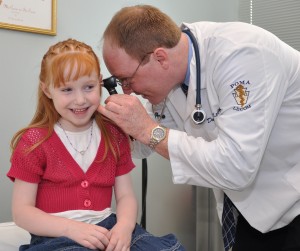 In an effort to reduce unnecessary use of antibiotics, the American Academy of Pediatrics on Monday updated its guidelines for how physicians should diagnose and treat ear infections in children.

The evidence-based clinical guideline, “The Diagnosis and Management of Acute Otitis Media,” published in the March 2013 Pediatrics and released online Feb. 25, provides recommendations to physicians managing uncomplicated AOM in children ages 6 months through 12 years. Compared to the previous guidelines issued in 2004, the new guidelines highlight more stringent criteria to use in making an accurate diagnosis of AOM, which will enable clinicians to prescribe antibiotics most effectively.

The guidelines include recommendations for treatment with antibiotics and pain relievers, or observation alone, based on the child’s age and severity of symptoms.

Step one, according to the new guidelines: Make sure the child really has an ear infection.

“There are dozens of reasons an ear can hurt,” Richard Rosenfeld  — of the State University of New York Downstate Medical Center, who helped write the new guidelines — said in an interview with NPR. “In this guideline we say, ‘Listen, if you’re not sure of the diagnosis, don’t even think about giving an antibiotic. Please, don’t even think about it.’ ”

Because the diagnosis isn’t always easy to make, the AAP offers detailed treatment suggestions, encouraging observation with close follow-up, but also leaves it up to the discretion of the doctor whether or not to prescribe antibiotics. If children who are being observed don’t improve within 48 to 72 hours from when symptoms first began, the guidelines recommend beginning antibiotic therapy, according to WebMD.

MedPage Today reports that antibiotics should be given for severe cases of bilateral or unilateral acute otitis media for children 6 months or older based on ear pain that is moderate or severe, lasts for at least 48 hours, or is accompanied by a temperature of 102.2°F or higher. For less severe cases, watchful waiting could be offered instead of antibiotics in joint decision-making with parents or caregivers. However, kids ages 6 to 23 months with both ears affected should be given antibiotics.

The 2013 guidelines are specifically for uncomplicated acute otitis media at ages 6 months to 12 years in otherwise healthy children without tympanostomy tubes, anatomic abnormalities such as cleft palate or Down syndrome, immune deficiencies, or cochlear implants.