TIME’s Best Cover Story Ever: Why are the medical bills so high? 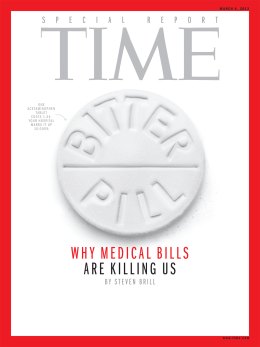 TIME magazine has dedicated its current issue to just one article: “Bitter Pill: Why Medical Bills Are Killing Us.”  This article, written by Time contributor Steven Brill, is required reading for all healthcare providers, administrators, legislators, patients — basically, everyone.

The article is too comprehensive to summarize in one blurb, but Mr. Brill did a good job of describing its origins to Jon Stewart on The Daily Show.  Throughout all of the discussions during the Obamacare debate, the focus was usually on who should pay the medical bills.  Brill said, “We never asked the first question: Why are the bills so high?”

The story is about money.  It’s about how outrageous pricing and egregious profits are destroying America’s health care and creating even deeper budget deficits. Brill spent seven months analyzing bills from hospitals, doctors, drug companies and every other player in the American healthcare ecosystem, following the money to find out exactly how and why we are overspending, where the money is going and how to get it back. What he discovered will radically change the way you think about our medical institutions.

The 36-page investigation, the longest single piece ever published by a single writer in TIME, reveals the shocking degree to which we enrich pharmaceutical companies, medical device makers, hospital administrators, laboratories and medical suppliers with lavish profits at the expense of patients. Brill explains that hospitals arbitrarily set prices based on inconsistent and subjective lists known as “chargemasters.” These prices vary from hospital to hospital and are often marked up as much as 10,000% the actual cost of an item. Seven patients’ bills examined line by line for this article offer a close-up window into what happens when powerless ­buyers ­meet sellers in what is the ultimate sellers’ market. Katalin Goencz, a former appeals coordinator in a hospital billing department tells TIME, “The hospitals all know the bills are fiction, or at least only a place to start the discussion, so you bargain with them.”

Brill gave a good example of the outrageous system, again on The Daily Show, when related to medical billing an example of buying shoes.  A retail store could price a low end pair of sneakers at $6,000.  “You can decide not to buy the shoes,” said Brill.  Or you can go to a different shoe store to compare prices.  “But none of that happens in healthcare,” said Brill.  As an “involuntary entrant” into the marketplace, patients never proclaim “Gee, I’d really like to go to the emergency room to see if they have a sale today.”

Drawing on a number of studies, Brill outlines a plan for $360 billion a year in potentials savings that would allow the US to provide better care at lower costs:

One solution close to the heart of all physicians is malpractice reform.  On that issue, Brill writes:

Finally, we should embarrass Democrats into stopping their fight against medical-malpractice reform and instead provide safe-harbor defenses for doctors so they don’t have to order a CT scan whenever, as one hospital administrator put it, someone in the emergency room says the word head. Trial lawyers who make their bread and butter from civil suits have been the Democrats’ biggest financial backer for decades. Republicans are right when they argue that tort reform is overdue. Eliminating the rationale or excuse for all the extra doctor exams, lab tests and use of CT scans and MRIs could cut tens of billions of dollars a year while drastically cutting what hospitals and doctors spend on malpractice insurance and pass along to patients.