The Supreme Court’s Decision on PPACA & Implications for Physicians

On June 28, 2012, the United States’ Supreme Court published its decision in National Federation of Independent Business et. al. v. Sebelius, Secretary of Health and Human Services,[2] which, in short, upheld the provisions of the Patient Protection and Affordable Care Act,[3] with the exception of the Medicaid expansion provisions.

In the majority opinion, authored by Chief Justice John Roberts, noted the Court’s role in the decision:  “Members of this Court are vested with the authority to interpret the law; we possess neither the expertise nor the prerogative to make policy judgments.  Those decisions are entrusted to our Nation’s elected leaders, who can be thrown out of office if the people disagree with them.  It is not our job to protect the people from the consequences of their political choices.”

I.  Jurisdiction to Decide the Case Not Barred by the Anti-Injunction Act

The Court began by determining that it had jurisdiction over the case by determining that the Act does not necessarily imply a tax, meaning that it would not fall under the scope of the Anti-Injunction Act, which would bar the Court from rendering a decision. The Anti-Injunction Act precludes lawsuits on taxation purposes until after the tax is paid and can only be used to obtain a refund.

In a 5-4 decision, the Supreme Court of the United States upheld PPACA’s individual mandate, which required individuals to purchase health insurance providing a minimum level of coverage or face a “penalty.”   The decision, which rested on the last of the government’s three arguments, defined the penalty provision for not obtaining health insurance as a “tax,” which could be controlled under Congress’ taxing authority.  In doing so, the majority opinion dismissed the government’s arguments that the mandate was enforceable under the Constitution’s Commerce Clause and its Necessary and Proper Clause.

A. The Commerce Clause

The Constitution authorizes Congress to “regulate commerce with foreign Nations, and among the several States, and with the Indian Tribes.”[4]  Under this provision, the government theorized that Congress may order individuals to buy health insurance because the failure to do so affects interstate commerce.  However, in the majority opinion, Chief Justice Roberts concluded that the mandate was not supported by the Commerce Clause.  He opined that Congress, in establishing the individual mandate, “regulated in advance” (future actions of buying insurance), and no precedent exists to support such future actions under the Commerce Clause.  Instead it can only regulate commerce that is already established (i.e. activities that have already occurred). Whereas the government argued that the mandate’s efforts to cost shifting nature of the mandate is integral to the regulation of interstate commerce because it drives down costs, the Chief Justice compared a provision to requiring people to buy vegetables and eat their broccoli, because eating healthy food would also drive down the costs of healthcare.

In her opinion, disagreeing with the majority’s opinion that the Commerce Clause did not support the mandate because Congress may not regulate “inactivity,” Justice Ginsburg argued that the courts have viewed the Commerce Clause as a “technical legal conception” that case law does not support.  Justice Ginsburg and the justices joining her opinion argued that the majority was incorrect in ruling that the individual mandate created something to be regulated that was not already present. Rather the healthcare markets and interstate health insurance systems are an existing entity that the individual mandate is used to regulate, rather than a future activity. 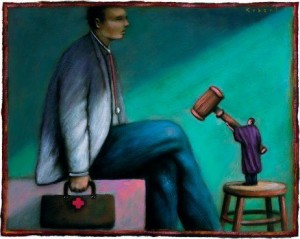 B. The Necessary and Proper Clause

The government’s second argument, that the individual mandate is valid under the Necessary and Proper Clause, fell to a similar fate. This clause of the Constitution vests the power to “make all Laws which shall be necessary and proper for carrying into Execution” the powers enumerated in the Constitution.[5]  Chief Justice Roberts held that even if “necessary,” the individual mandate is not “proper” because it is amounts to an inappropriate expansion of federal power and is not as narrow in scope as other laws upheld under the Clause in the past.  Additionally, the Chief Justice mentioned that, in every circumstance where the Court has upheld the extension of power under the Necessary and Proper Clause, it has involved exercising authority that is derivative to another power already granted.  The individual mandate, he concluded, while possibly “necessary” to PPACA’s insurance reforms, would not be a “proper” means for effectuating those refers because of its expansion of federal power.[6]

C. The Individual Mandate as a Tax

The majority ultimately ruled that the individual mandate could be upheld as a taxable measure under Congress’ authority to lay and collect taxes. Chief Justice Roberts relied on precedent stating that “every reasonable construction must be resorted to, in order to save a statute from unconstitutionality.”[7]  The majority opinion reasons that, though not a tax by name, the individual mandate is a tax in form based on the language of the statute.  Because the mandate does not apply to those who do not pay federal income taxes, is paid to the IRS, and is determined by the number of dependents and household income, the individual mandate could be viewed under the taxing authority of Congress.  Additionally, the penalty required would not be so high that one is forced to buy health insurance and is not only limited to willful violations. The Chief Justice analogized the mandate to the increased tax for cigarettes, which is clearly used to deter their purchase and is a lawful use of Congress’ taxation authority.[8]  By upholding the mandate, the Court has simply said that Congress has acted within its existing authority; it did not create any new federal powers.

The dissenting opinion, comprised of Justices Scalia, Kennedy, Thomas, and Alito, counters that the individual mandate is a means to compel behavior, and thus cannot be considered merely a tax. According to the dissent, the majority’s argument that the mandate is not a penalty because it does not punish unlawful behavior was ill-conceived. The dissent also points to the mandate’s location in PPACA. Rather than sitting amongst the other “revenue provisions,” the individual mandate remained at the forefront within the “operative core” of the first title. The dissent further argues that to consider the individual mandate anything other than a requirement to purchase healthcare insurance would require the statute to be re-written entirely.

Medicaid, which originally applied to four groups (the disabled, blind, elderly, and needy families with dependent children), is to be expanded under PPACA to all individuals under 65 with incomes below 133% of the federal poverty line.[9] In a 7-justice majority, the Supreme Court struck down the provision in PPACA that would deny Medicaid funding to states that do not comply with the Medicaid expansion.

The majority struck down the provision on the basis of the Spending Clause, which allows Congress “to pay the Debts and provide for the . . . general Welfare of the United States.” U.S. Const., Art. I, § 8, cl. 1. Relying on precedent, the Court concluded that Congress may use financial incentives to encourage states to act in a particular manner but, when “pressure turns into compulsion” the legislation has gone too far.[10] Chief Justice Roberts compared the Medicaid penalty as a “gun to the head” because states stood to lose their entire Medicaid funding. According to the majority, because states do not have the option to opt out without severe penalty, that is, losing all existing Medicaid funding on top of any new funding from the program, it creates more than a minor penalty and would be impermissible under the Constitution.

The majority viewed the Medicaid expansion as a new project rather than an addition to old law. The Court reasoned that Congress could impose conditions for the new program or reasonable expansions thereof but it could not deny existing funding for failure to comply with provisions of a new program that the states did not see coming.  Justice Ginsburg and Justice Sotomayor disagreed, reasoning instead that the Medicaid expansion did not constitute a new program but simply an outgrowth of the existing one. Additionally, where the majority noted that states could not foresee new conditions coming and could not be bound by them, the dissenting opinion pointed out that the Medicaid Act put all states on notice that the program might expand when it reserved a right “to alter, amend, or repeal any provision.”[11]

In deciding to strike down the Medicaid expansion penalties to states not in compliance, the Court was tasked with determining whether or not to uphold the balance of PPACA. The Chief Justice, despite a strong dissent, concluded that Congress would not have intended for all of PPACA to be eliminated should this provision be struck down. As such, the Court ruled that any constitutional violation of the Medicaid expansion was entirely remedied by striking down that specific provision and leaving the balance of PPACA otherwise intact.   Justices Kennedy, Scalia, Alito, and Thomas disagreed, believing that it is not the role of the Court to sever one part of a statute and allow the rest to stand as it could “impose unknowable risks that Congress could neither measure nor predict.”

Ultimately, the decision left the Affordable Care Act largely intact, basing its decision on Congress’s authority to tax rather than the Commerce Clause or the Necessary and Proper Clause. The only section that will be removed is the penalty eliminating all Medicaid funding from states who do not comply with the program’s expansion.

[1] Ms. Welch is a partner with the healthcare practice of Arnall Golden Gregory LLP (www.agg.com) representing physician practices on a national basis.  Ms. Worrell is a rising second year law student at the Georgia State University College of Law.

[7] Hooper v. California, 155 U.S. 648, 657 (1895).  Perhaps, in part, this effort to give every reasonable construction to save the statute can explain the discrepancy in the Court’s findings that the penalty was not a tax for purposes of its Anti-Injunction Act analysis but was considered a tax for purposes of its analysis on the viability of the mandate for constitutional purposes.

[8] This argument has led to speculation as to what other efforts, such as mandatory contraception coverage, might be characterized as within the taxing authority and overturned at upcoming elections.