The Philadelphia Inquirer reports that about 150 physicians affiliated with Abington Memorial Hospital met there Wednesday and decried its plan to stop performing abortions as part of a partnership with nearby Holy Redeemer Health System, according to doctors at the meeting. With growing community outcry over the proposed merger, the physicians’ disapproval may be enough to undermine it, or at least prompt a reappraisal of the terms, some doctors believe.

“During the year of negotiations behind closed doors, no staff or community members were involved in the decision-making process,” wrote the 20 residents in Abington’s ob-gyn program, in a letter they released after the meeting. “There is strong opposition to having our medical practice dictated by Catholic doctrine rather than our patients’ best interests and standard of care.”

Abington Hospital has earned its reputation one of the leading teaching hospitals in the Philadelphia area as it attracts some of the finest medical residents in family and internal medicine, surgery, and OB/GYN.  The quality of its residents have helped Abington achieve its status. However, several physicians have said that Abington’s ability to recruit the best residents is in jeopardy.  Why would a top OB/GYN resident choose Abington when they would be prohibited from performing a significant medical procedure?

Abington performs more than 5,000 deliveries a year and in the last two years has performed 64 to 70 abortions a year, with the hospital setting providing a certain level of safety for the procedure, said Dr. Sherry Blumenthal, a member of Abington’s OB/GYN department . A large number of the abortions are performed for medical reasons, she told Montgomery News, adding “there have been some emergency ones.” 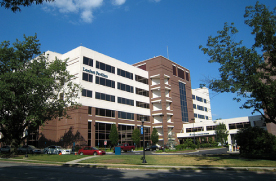 In one instance, a woman, who was 19 weeks pregnant, had her water break and went to the Holy Redeemer ER, where it was determined that both the woman and the fetus had a serious infection, Blumenthal said. Neither would have survived, but since Holy Redeemer could not perform an abortion, the woman was sent to AMH, where “an Abington physician saved her life; now they would not be able to.”

Lisa Jambusaria of Los Angeles, who is in the final year of her four-year ob-gyn residency training, told the Philadelphia Inquirer that she would never have applied to Abington if she had known abortions would be banned. “We are one of the rare hospitals that provides these services,” Jambusaria said.

According to the Women’s Law Project, Catholic health systems are slowly monopolizing health care across the country.  As of 2011, approximately one-fifth of all hospital admissions in the United States and between 10 and 20 percent of admissions in Pennsylvania are to Catholic hospitals.  These systems impose their religious beliefs, contained in the “Ethical and Religious Directives for Catholic Health Care Services,” on patients of all backgrounds and faiths, interfering with the medical practitioner-patient relationship.

The result of this policy in practice could be that women in need of abortion, possibly needed to save their lives, may have a delay in treatment or may require a transfer while they are unstable to a non-Catholic hospital.  Abington may thus become vulnerable to medical malpractice lawsuits and claims for violations of the Federal Emergency Medical Treatment and Labor Act (EMTALA) for putting religious doctrine before women’s health.

In a letter to Abington’s CEO Larry Merlis, several Rabbi’s from the synagogues near the hospital explained that “Jewish tradition mandates an abortion in the event that carrying a fetus to term would endanger the life of the mother. In making the decision to no longer provide abortions at AMH, you are in effect saying that one religious tradition’s teachings should take precedence over all others. Should AMH commit to this path and refuse to perform abortion services, it would seriously undermine its status as a community hospital in any meaningful sense of the term.”

As of July 12, more than 4,400 people have signed a petition on change.org which, in part, states that “We are especially concerned that AMH is subjecting itself to a sectarian ideology that eliminates abortion services as AMH has stated and will impact: End-of-life issues; Contraceptive services for employees and patients; Respect of Do Not Resuscitate orders and advance health care directives; Stem cell treatment; Infertility treatment; Domestic partner rights; Resident and fellowship training.”

Shortly following the merger announcement, Abington released a statement saying that it would provide “all reproductive health services except abortion,” including contraception counseling and services, tubal ligations, vasectomies, infertility services, emergency contraception for rape victims and others, and “all necessary measures to preserve the health of the mother.”

MergerWatch, an organization that follows hospitals mergers across the country, claims that community hospitals are merging with other hospitals or health systems to relieve financial stress. When the merger is with a religiously-sponsored health system that uses doctrine to restrict care, the consequences can be serious for patients.

As for the final outcome of the Abington/Holy Redeemer merger and its effect on patient care, those details will be spelled out during the next three months while the hospitals conduct a period of due diligence.  In the meantime, what are your thoughts?

2012-07-12
Brad Broker
Share
Previous Troubling Trend: A Hidden Requirement for Office Visits
Next The Most Important Element of Your Financial Plan: Why Flexibility is Crucial to Meeting Long Term Goals (Part II)