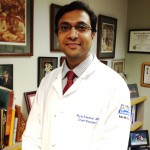 Often, the correct answer to a question is the obvious one.

A team of medical residents from Einstein Medical Center followed that rule and won the medical Jeopardy game called “Doctor’s Dilemma” at the American College of Physicians annual scientific meeting this year. Einstein is the only residency program in the country to win the award four times. This year we defeated 31 other teams from across the country at the national competition in New Orleans, after besting teams on the regional and state level.

But it wasn’t looking good when the third and last game was underway on the final day of the conference. I stood on the sidelines in a nervous sweat, my heart pounding, as we fell behind the other teams who’d also made the finals.  Last year, I was a member of the three-person team that was eliminated at regionals; this year, as chief resident, I was the coach of the team that made it all the way.  It was equally nerve-wracking.

The set-up is identical to the popular TV show, “Jeopardy” with Alex Trebek.   The three-member teams are seated at the podiums, each team sharing one buzzer, and select from categories of medical questions. The harder questions have more points, which accrue until the last question, when teams wager their points on a final question.  Just like the TV show, contestants have to answer in the form of a question.  The game only takes about 20 minutes – but feels like two hours.

The key, as in the TV show, is to be first to press the buzzer to answer. Every resident who’s good enough to have made it to finals knows the answers to most of the questions. Our strategy was to buzz in after only two or three words of the question; sometimes, of course, the rest of the question wasn’t what we anticipated and we got it wrong.  Dr. Glenn Eiger, director of Einstein’s residency program, is so supportive that he provides the team with a buzzer for our practices during the year. It’s a fun diversion from grueling residency requirements of working up to 14 hours a day, six days a week, but we do take it seriously.

Team Einstein was behind most of the time in the final game. With three questions to go, the team from Baylor Medical School was ahead by 70 points. Even though I always coach the team not to give up, I began doubting our chances of winning. Then we got a 50-point answer right. Then another. Then a third—which was a question we’d actually practiced: What is the bias generated when a physician accepts a diagnosis at face value?  A team member buzzed in immediately after the trigger word “face value,” and got it right: anchoring heuristics.

With the final Jeopardy question to go, Baylor was 40 points behind but could still triumph by wagering all of its points and getting the final question right, if we got it wrong. Our team members Guillermo Garrido, MD, a third-year resident; Jedrzej Wykretowicz, MD, a second-year resident, and Praveen Ramakrishnan, MD, a first-year resident, waited tensely. Then came the question: What is the rheumatologic condition that involves the first carpal-metacarpal joint resulting in “squaring” at the base of the thumb?

Everyone was taken aback. The answer was easy:  osteoarthritis. But could a game so challenging, so filled with increasingly difficult questions about the obscure and esoteric culminate in such a straightforward, simple way? Could it somehow be a trick question?  We’d faced a couple of those during the earlier competition. At the state contest at Hershey Medical Center, for instance, the questioner had asked what antibiotic starting with the letter N is not absorbed in the intestinal tract. The answer, which we got correct, is Neomycin.

So here our team was conferring amongst themselves about this question about rheumatology, trying to figure out an answer that wasn’t the obvious one. Then it was time to wager our points and respond.  The Baylor team, certain that the answer had to be more complicated than it seemed, said hemachromatosis. We said osteoarthritis – and we won.

Yes, we screamed and jumped up and down like contestants on a television game show. We went out for a nice dinner and drinks in the French Quarter to celebrate.  And as soon as a replica of the Osler trophy, named for William Osler, the father of modern medicine, is inscribed, it will take its place – again – in Dr. Eiger’s display cabinet.

Four out of the five times the Einstein team has made it to the nationals, we’ve won. Partly it’s because our residents represent many international medical students who are trained more to rely on their memory than on referencing materials. This year, our team members were from Venezuela, Poland and India; our back-up member, in case of an emergency with the others, was Mahasweta Gooptu, MD, a  third-year resident also from India.  Certainly another factor in our success is the support of faculty, including Dr. Eiger and Steven Sivak, MD, chairman of Einstein’s Department of Medicine, who treated the team to dinner after our first day’s win.

We have a tradition at Einstein in which the team of residents has two competitive games against some of the medical department’s smartest attending physicians, including Dr. Eiger, just before we go to the regional competition.  This year, our team beat the attending physicians in both games!

It helps, too, to remember that, often, the correct answer to a question is the obvious one.

2012-06-11
Brad Broker
Share
Previous Will Your Investment Portfolios Stand Protected in a Volatile Economy?
Next A Uniquely American Path to Fixing Health Care