A National Plan to Combat Alzheimer’s 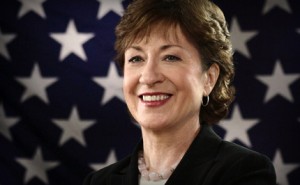 Alzheimer’s disease takes a tremendous personal and economic toll on both the individual and the family.  As someone whose family has experienced the pain of Alzheimer’s too many times, I know that there is no more helpless feeling than to watch the progression of this dreadful disease.  It is an agonizing experience to look into the eyes of a loved one only to receive a confused look in return.

An estimated 5.4 million Americans have Alzheimer’s disease – including more than 25,000 people in Maine — more than double the number in 1980.  If nothing is done to change the current trajectory, 13.5 million Americans over the age of 65 will have Alzheimer’s disease by 2050.  In addition to the suffering it causes, Alzheimer’s costs the United States $183 billion a year, primarily in nursing home and other long-term care costs.  This figure will only increase exponentially as the baby boom generation ages.  If nothing is done to slow or stop the disease, Alzheimer’s will cost the United States $20 trillion over the next 40 years.

At a time of mounting deficits, the increasing number of Alzheimer’s cases has dire implications for our federal budget as well.  The average annual Medicare payment for an individual with Alzheimer’s is three time higher than for those without the condition.  For Medicaid, average payments are nine times higher.  Failure to achieve progress in the fight against the disease will result in Alzheimer’s costs to Medicare skyrocketing more than 600 percent and costs to Medicaid growing more than 400 percent by 2050.

Despite these alarming projections, we did not have a national strategy to defeat Alzheimer’s, and our efforts to combat the disease lacked coordination and focus.  I am delighted that this is changing.  In 2010, along with former Senator Evan Bayh (D-IN), I authored the National Alzheimer’s Project Act.  Our bill, which was signed into law by the President in January 2011, required the Department of Health and Human Services (HHS) to develop a coordinated, strategic national plan to combat and effectively treat Alzheimer’s. As a result of our efforts, HHS this week unveiled an ambitious new plan to improve care and support services for Alzheimer’s patients and their families, and to accelerate research to develop treatments that would prevent, halt or reverse the course of Alzheimer’s.  In addition, a new website, www.alzheimers.gov, will serve as an important source of information and advice to support caregivers.

Our investments in Alzheimer’s research have begun to pay dividends.  New treatments are tantalizingly within our grasp.  Moreover, if scientists can find a way to delay the onset of this devastating disease for even five years, our nation will save more than $60 billion every year in Medicare and Medicaid costs, and an incalculable amount in human suffering.

If we are to keep up the momentum we have established, however, we must increase our investment in Alzheimer’s disease research and our commitment to caregiver support.  We have made tremendous progress, but this is no time to take our foot off the accelerator.  That is why I am pleased that the legislation we authored led to this new dedication of resources.

As the Senate co-chair of the bipartisan Congressional Task Force on Alzheimer’s disease, I am committed to conquering this devastating disease that has caused such pain for so many American families.  This national plan will help us focus our efforts to combat Alzheimer’s and accelerate our progress toward better treatments, a means of prevention, and ultimately even a cure.

Susan M. Collins was first elected to represent Maine in the United States Senate in 1996. Known for her work in facilitating bipartisan compromise on important issues, Sen. Collins is Senate Co-Chair of the bipartisan Congressional Task Force on Alzheimer’s disease.

2012-06-05
Brad Broker
Share
Previous What to Expect from the Supreme Court Ruling on the Health Care Reform Law
Next Will Your Investment Portfolios Stand Protected in a Volatile Economy?