Docs' Use of iPads Becoming Mainstream 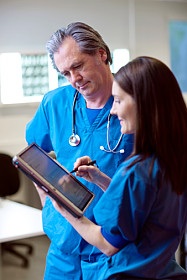 According to the new Taking the Pulse(R) U.S. 2012 study from healthcare market research and advisory firm Manhattan Research, physicians’ device and digital media adoption are evolving much faster than anticipated, especially when it comes to tablets. The study surveyed 3,015 U.S. practicing physicians online in Q1 2012 across more than 25 specialties.

Striking key findings from the Taking the Pulse(R) U.S. 2012 study include:

“Physicians are evolving in ways we expected — only faster,” said Monique Levy, Vice President of Research at Manhattan Research. “The skyrocketing adoption rates of tablets alone, especially iPads, means healthcare stakeholders should revisit many of their assumptions about reaching and engaging with this audience.”