Imagine a world where a simple cut, or common cold, can routinely lead to hospitalization and even death. Sixty years ago, that world was a reality. The advent of penicillin along with 40 years of medical innovation changed all that, resulting in a host of new antibiotic drugs that literally transformed public health in the United States.

However, as with many other forms of life, living micro organisms will adapt and build defenses to outside threats over time. For bacteria, that defense mechanism is evolution: the more often a drug is used to treat a certain type of bacteria, the more that bacteria will respond by developing resistant strains.

To counterbalance this progression, patients need access to newer and stronger forms of antibiotics when resistance occurs. Unfortunately, drug development has not kept up with the pace of bacterial evolution in recent years.

According to the Food and Drug Administration (FDA), the approval of new antibiotics has decreased by 70 percent since the mid-1980s. A combination of factors – including the high cost of drug development and small profit margins – have helped to drive companies out of the anti-infective space for markets where the return on investment is much higher. The result, quite simply, is a stagnant research and development pipeline for antibiotics that is ill equipped to keep up with evolving bacterium. Without fresh and complex medical treatments available, the American people face a potentially catastrophic situation. 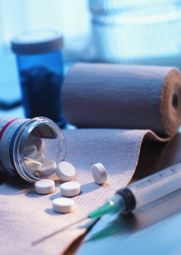 Today, antibiotic-resistant infections cause more deaths annually than AIDS, traffic accidents, or the flu – and those numbers will only get worse if nothing is done. The discovery of the “New Delhi” gene, which can create drug-resistance to nearly any bacteria it comes in contact with, is a threat that remains particularly worrisome as it makes these infections virtually untreatable. Americans from all walks of life are at risk to bugs like the “New Delhi” gene, but patients with chronic illnesses, children, and wounded soldiers on foreign battlefields are especially vulnerable populations.

Without new policies and market mechanisms that encourage companies back into the antibiotic business, we are simply ignoring the looming public threat that compromises the health and welfare of the United States – and the world. Given the fact that it takes years to create and get a new drug approved by the FDA, it is imperative that we address this problem now before we are faced with a deadly bug for which no treatment is available.

Therefore, I joined with colleagues on both sides of the aisle to introduce H.R. 2182, the Generating Antibiotic Incentives Now (GAIN) Act, now included in broader health care legislation known as the FDA User Fee Authorization Act. Among other things, the legislation creates more value for new antibiotic companies by increasing FDA data exclusivity protections for new products, while at the same time encouraging greater collaboration between regulators and companies that seek approval for new treatments.

As both a physician and a Member of Congress, I recognize that the threat posed to public health by bacterial infections is not a political issue, but rather a serious health problem facing all Americans. People from all walks of life – and on both sides of the aisle – are at risk. It is my hope that this legislation – crafted on a bipartisan basis for the benefit of patients in all 50 states – will spur innovation and encourage the development of new antibiotics to the superbugs of tomorrow.

Congressman Phil Gingrey, M.D., was elected to the U.S. House of Representatives in 2002.  He is a graduate of the Medical College of Georgia and practiced for 26 years as an OB/GYN.