Media and the Doctor Patient Relationship

Once upon a time there existed the much revered fictional TV doctor who exhibited compassion, wisdom and the ability to cure virtually any disease in neat 60 minute episodes. Marcus Welby MD was the prime example of this early portrayal of the benevolent father figure who could succinctly advise and heal the body and soul.

As television became increasingly in love with the genre know as the situation comedy, the revered doctor became an everyman, possessing the ability to heal while also making us laugh and cry about the realities of illness, trauma and death. Hawkeye and Trapper John of M*A*S*H* supplied many viewers with hours of laughter while making us contemplate the horrors of war.

Today’s medical shows have become a mix of soap opera, drama, and character studies with shows like Grey’s Anatomy and House M.D.

Through the years these varied medical shows have been a staple in the American households’ television/cable viewing schedule.

However, one thing has changed.  In the past only fictional doctors were prevalent on television while real physicians rarely involved themselves in such a public enterprise. In contrast while today’s fictional doctors continue to be characters in comedies, detective shows, and soap operas, real doctors have emerged as medical reporters, talk-show hosts and even infomercial participants. 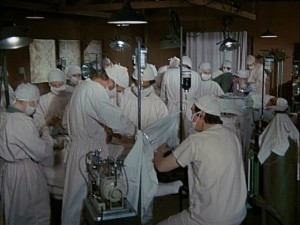 The question to consider is whether this media involvement by real physicians is good for patients and the medical profession.  Can sound medical advice be delivered in a sound bite or internet blog?  Many of us field questions on a daily basis about information gathered from a Google search or obtained from one of our medical colleagues on TV.  There is no simple answer but in the final analysis we are at a point of no return.  The medical media industry is here to stay and we each have to find a way to stay informed about what our patients are watching and reading so that we are ready to advise, consult and sometimes correct the information gleaned from a two minute medical synopsis viewed on a talk show.

The public’s growing fascination and reliance on media for medical expertise has also resulted in the birth of doctor rating internet sites where patients post information about and rate their experiences with medical professionals.  These ratings have become a source of frustration for many physicians who have found their reputations called into question by a less than complementary website rating. Patients grade doctors commenting on everything from their knowledge base, interpersonal skills and timeliness.

Proponents of such sites point out that patients are customers who are paying for a service and should be able to openly express their level of satisfaction.  They argue that informed consumers will make better choices about how to spend health care dollars.

Critics see the sites as defamatory and one-sided. If a doctor gets his bedside manner slammed with a negative review that he/she feels is unfair, federal privacy law prevents him/her from discussing the particulars of the case in a rebuttal.

My concern about such rating systems is not so much what they are trying to do but the way they are going about it.

Many sites boast of thousands of ratings but often only 2 or 3 patient reviews may have been placed about any single physician.  The average physician sees hundreds of patients in a year. Should these few ratings – good or bad- be taken as representative of the doctor’s ability?  With so few ratings per doctor, validity of the ratings is an issue. What if someone with a grudge is responsible for all of the negative comments or someone with a vested/monetary interest is writing multiple rave reviews? The site owners have no way of knowing if this is happening.

Not only is validity an issue but the impact of these ratings on the doctor-patient relationship must also be considered.  In reaction to negative comments, some doctors have invested money in managing their images by running their own web sites, increasing advertising budgets and hiring companies that provide contracts to new patients requiring them to ask their doctor’s permission before grading him or her online.

Somewhere in the midst of this media/internet driven scenario there must be room for compromise.  Patients need to have their say about what doctors are doing right and what can be improved. However, their opinions need to be collected in an accurate and meaningful way that takes into account the complexity of health care delivery.

Unfortunately there is no RVU for the nurturing of the doctor patient alliance, but it is a vital part of patient care.  If we do not find a way to address and evaluate our success in cultivating this relationship, someone else will do it for us.