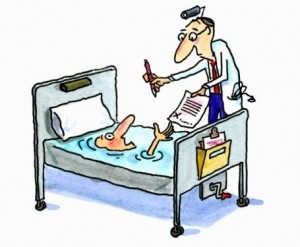 The number of emergency room visits in the U.S. rose nearly 13 million in 2009 – about 10 percent — to more than 136 million visits – which is the largest increase ever, according to preliminary data from the Centers for Disease Control and Prevention.

Statistics like this, combined with changes that will result as the 2010 health law is implemented, have led some emergency room doctors to focus on medical liability reform as a means to reduce the nation’s health care costs by discouraging the practice of defensive medicine.

It’s expected to be a hot topic this week during the American College of Emergency Physicians annual meeting.

Dr. Michael Gerardi, an ACEP board member, said he and his colleagues want comprehensive medical liability reform that includes indemnification based on recognized guidelines, caps on non-economic damages and medical courts where providers would be judged by medical peers.

“In America, we sue far too often for bad outcomes and not deviations from standard of care,” Gerardi said.  “The overall anxiety of patients and the unacceptance that bad outcomes happen are driving costs.”

As safety-net providers, emergency rooms have become increasingly overcrowded. One factor contributing factor is the 1986 passage of the Emergency Medical Treatment and Labor Act, which requires hospitals to provide people with emergency services regardless of their ability to pay.

Now, some emergency physicians fear that EDs will be placed in an even more difficult position by a provision in the Affordable Care Act that will financially penalize hospitals that don’t meet targets for reducing their readmittance rates by better coordinating care. “It’s going to have a chilling effect. We’re going to have pressures from hospitals to not admit [these patients] because they’re not going to get paid for it, and we’re going to have incredible pressures from family and the specter of lawsuits, if for heaven forbid, we make a mistake,” Gerardi said.

Meanwhile, two studies released Tuesday in the Annals of Emergency Medicine explore the association between medical liability concerns and hospital admissions from the ED. In one study of patients admitted to the hospital for potential acute coronary syndrome, emergency physicians reported choosing admission that they would not choose themselves for 27 percent of patients. In another study, authors surmise that increasing concerns about medical malpractice litigation likely caused the number of congestive heart failure patients discharged from the ED to drop by 63 percent between 2006 and 2010.