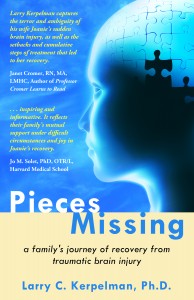 As a result of a freak fall while jogging, my wife, Joanie, sustained a subdural hematoma.  It took three emergency room visits, two hospitalizations, one neurosurgery, and several months of rehabilitation before she regained her lost capacities. During her first hospitalization, we became acquainted with the hospitalist’s role which, while not new in the United States, was new to us.  In the book I wrote about our experience with her injury, treatment, rehabilitation, and recovery, I included a commentary on the hospitalist phenomenon as we experienced it at one Massachusetts hospital.  That commentary, below, is excerpted from Pieces Missing: A Family’s Journey of Recovery from Traumatic Brain Injury, Two Harbors Press, 2011.

A 1998 article in Physicians News Digest(1) states: “About 2000 physicians nationwide call themselves hospitalists. Specializing in the management of hospitalized patients, the hospital becomes their office. A hospitalist takes over for a primary care physician when it comes time to admit a patient. For your average primary care physician, this means fewer, or no, visits to the hospital at the end of their office hours for rounds. Usually working on flexible, yet intense shifts of eight to twelve hours, the hospitalist turns his or her pager off when the shift is over.”

In just eight short years after that article was published, the number of hospitalists practicing in the U.S. was estimated to have grown to 12,000, with the expectation that it will eventually grow to 30,000 (2). [The Society of Hospital Medicine estimates that the latter number has already been reached (3).]

All things considered, though, it seems to me that the major benefit of having a hospitalist care for a hospitalized patient accrues mainly to the primary care physician, who no longer has to suffer the inconvenience and wear and tear of visiting the hospital to see his or her patients, nor suffer the inadequate reimbursement that insurance companies provide for such visits. It’s the patient who gets the short end of the stick in terms of continuity of care, in my opinion. Although she is seen by hospitalists while in the hospital, she is not necessarily seen by the same one during the course of her stay, potentially leading to communication disconnections among providers and disruptions in continuity of care. Even if the patient is seen by the same hospitalist throughout her hospitalization, she does not receive the benefit of being seen by a physician—namely, her primary care physician—who has an in-depth understanding of her, her prior history, and her health concerns.

The point that some raise, that hospitalists’ treatment and activities are monitored more closely than are those of primary care physicians seeing their hospitalized patients, is hardly relevant. It implies that primary care physicians cannot be monitored as closely, but what is to say that they cannot? They may not be used to being monitored so closely, but that does not mean that they cannot be. Changes in hospital practice happen all the time (albeit slowly).

The medical community itself is not unaware of these issues, as they are a matter of vigorous discussion in the medical literature. An acquaintance of mine, an internal medicine physician who very much favors the hospitalist system, recognizes that most patients do not agree with him. “Patients hate it,” he plainly admits.

Although the whole hospitalist issue is still a work in progress in the medical community as it tries to adapt to this change and perfect its workings, I think that the medical community is inclined to believe that the tradeoffs are worth it to them. From the health care consumer’s point of view, however, the tradeoffs are not. Perhaps the vigorous discussion in the literature will come to encompass an examination of the shortcomings I have pointed out here and result in the provision of hospital care that is more satisfying and continuous.

Larry C. Kerpelman, Ph.D. is an award-winning health care writer and editor who has published two academic books and written numerous articles for publications. His book, Pieces Missing: A Family’s Journey of Recovery from Traumatic Brain Injury (Two Harbors Press, 2011) is available from www.LCKerpelman.com, www.Amazon.com, or your local bookseller.  He can be contacted at lkerpelman@gmail.com.