Will Hospital Employment Protect the Interests of Physicians?

Physicians across the nation are increasingly selling their practices or seeking employment directly with healthcare systems. According to a report released by the policy research firm Center for Studying Health System’s Change, physician employment in hospitals has grown since 2007 as part of a greater strategy for hospital-physician alignment and increased service-line profits. A recent analysis by Accenture revealed that the percentage of physicians who are in private practice and truly independent have been declining at 2 percent annually, and is projected to decline by 5 percent annually by 2013.

Historically, physician employment has been a problematic model. Direct employment of physicians by hospitals was one hallmark of managed care in the 1990s, but the practice was largely dropped. However, the current trend toward hospital employment appears to be different from the 1990s.

Today, many physicians are seeking hospital employment to relieve them of the stress of administrative duties, physician recruitment, the struggle for reimbursement, high malpractice rates, and the general risks and challenges associated with managing a private practice. Physicians are increasingly looking for an improved work/life balance and a more manageable work schedule. Hospital employment may provide physicians with a safe harbor where they can ride out the anticipated changes to healthcare delivery created by the passage of healthcare reform, and may also provide greater access to leading-edge healthcare IT tools, facilities and equipment.

From the hospital’s perspective, employing physicians represents a way to address the issue of physician/hospital competition that arises when physicians open their own specialty hospitals or surgery centers. Tighter alignment with physicians is viewed not only as a way to capture more specialty and hospital referrals in a fee-for-service payment system, but also as central to building the clinical and financial integration needed to succeed under potential new payment models, such as accountable care organizations (ACOs), that involve risk-sharing and reward quality and efficiency.

The trend of hospitals employing physicians has accelerated and broadened to include primary care providers, as well as a wider range of specialists. For hospitals worried about physician shortages, employing physicians can help lock in expertise and boost patient volumes and revenues in high-growth service lines, including cardiovascular care, orthopedics, cancer care and radiology. 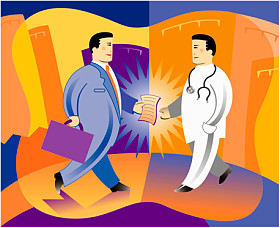 There are numerous physician-led alignment models that serve as alternatives to direct employment of doctors by hospitals. Examples include the physician-hospital organization (PHO) and the independent practice association (IPA). Under healthcare payment reform, a clinically integrated accountable care organization (ACO) allows collective contracting without the need for employment by a single entity. These types of models could preserve physicians’ independence while still allowing them to take advantage of benefits of scale, risk sharing and the new pay-for-performance incentives.

One advantage of being employed by a hospital or medical group may be that a physician no longer has to pay for his or her individual medical professional liability coverage out-of-pocket. However, this is not always in the best interest of the physician, who may be severely limited in his or her ability to select the best protection. As an employee, it is likely that a physician may not have input into which insurance carrier is protecting his or her greatest asset – a physician’s professional reputation. Employed physicians may not even remain with a traditional carrier – in many instances they will be insured by a captive, risk retention group or self-insured situation that does not provide the same level of service and partnership that physicians may have become accustomed to while in private practice.

Another factor to consider is the fact that when physicians share the same medical professional liability protection as the hospital that employs them, there is the potential for a conflict of interest when it comes to defending the physician against a malpractice claim. When a physician is insured through a hospital or medical group also named in the suit, he or she may be asked to waive any potential conflicts of interest to help ensure a cooperative and efficient joint defense. An attorney’s representation of the hospital or medical group may materially limit the defenses and strategies the lawyer can use in the physician’s defense. These joint defenses can spell trouble, especially when a physician’s interests aren’t the same as the hospital, medical group or other physicians in the same practice.

How the physician employment trend and its implications will unfold remains to be seen. But with so many changes to healthcare delivery on the horizon, New Jersey physicians need to carefully consider the best model for them, and should seek appropriate advice from their attorneys, consultants and financial advisors to make sure that all ramifications are understood in advance of a decision. When considering a potential employment situation, a physician should seek counsel from his or her broker to understand the impact to his or her professional liability protection.  Ultimately, careful consideration needs to be given to the trade-offs between autonomy and employment.

Patricia Costante is the Chairman and CEO of MDAdvantage Insurance Company of New Jersey in Lawrenceville. For more information, visit www.MDAdvantageonline.com.