Physician Demand for iPad EMRs is Growing. Are Vendors Ready? 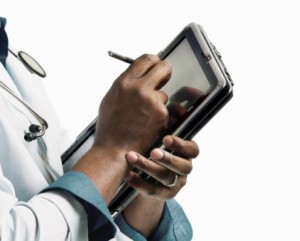 The answer to that question is a surprisingly resounding “No!” The medical software industry is far from supporting the iPad on a meaningful scale. Buyers would think that vendors eager to grow market share would quickly adopt new, flashy technologies, but software vendors are surprisingly slow to react. Electronic health records vendors need to get on board or face the prospect of losing market share to faster-moving competitors.

There is no doubt that buyer demand for the iPad is surging. A recent Software Advice survey found that nearly 35% of healthcare providers were “very likely” to purchase a tablet PC in the next year.

Don’t forget that the iPad enjoys 87% market share of the tablet PC market. That’s a lot of potential customers looking for iPad EHRs.??However, there are very few vendors well-positioned to benefit from this trend. In fact, only two EHR systems currently on the market were built from the ground up for the iPad:

Nimble – Released by ClearPractice in October, 2010.

Aside from these two companies, only a handful of other vendors (most notably AllScripts and Quest) have released iPad apps to supplement existing EHR systems. I should note there are other systems on the market that are accessible from the iPad’s web browser, but they are not native iPad apps. (Some readers might be wondering about MacPractice. Their SaaS system does run on the iPad via a VCN interface, but it’s not a native iPad app either.)

So where are the 300+ other EHR software companies? They have iPad apps “in the works,” but not ready yet. This really comes as no surprise. The medical software industry is notoriously slow to adopt new technologies. Have you ever seen your doctor’s office running a system that looks like it is from the 80s? We hear from these practices every day. Plenty of software vendors are still selling outdated, DOS-based systems with Windows interfaces (we will withhold names to protect the innocent).

As a result of this slow movement, we expect a number of newer software companies to quickly gain popularity and seize market share from vendors who are slow to move. Interestingly, a number of garage-based startups are already poised for growth: medical iPhone and iPad app developers.

There are currently well over 10,000 medical apps available in the App Store. These apps range from basic ICD-9 lookup tools to more advanced apps to track patient SOAP notes. While many of these small developers won’t have the resources to scale and develop sophisticated EHRs, some just might have the ability (and the guts). These potential movers include some of the more popular medical apps. Here are our top candidates:

Mediforms EMR – The free version of this EMR was released in early 2010 and is geared towards gynecologists. The paid version will be coming in 2011 and will be more full-featured, including templates for other specialties.

SurgiChart – Released just last week, SurgiChart allows surgeons to track and share their patient case summaries. It currently does not allow the ability to create or edit them.

MediMobile – MediMobile is primarily a charge capture application. It also offers the ability to track patient information and PQRI requirements. It also integrates with existing billing systems. This core functionality provides a lot of the core EMR functionality and could pave the way towards a more complete EMR system.

Epocrates – One of the most popular medical apps on the App Store, Epocrates is a mobile drug information resource for physicians. It doesn’t offer ability to track patient records, but tracking drug interactions is a key component of EMRs. If they were able to build a mobile EMR, they’d be able to capture market share quickly through their large user base.

Medscape – While this app is comparable to Epocrates as a drug reference tool, the vendor WebMD is a likely iPad EMR candidate. Despite the WebMD/Emdeon split in 2006, WebMD could realize synergies with their past medical billing systems and leverage a large network of users.

2011-02-01
Brad Broker
Share
Previous Which of these is not a physician: MD, DO, DDS, ENT? Patients Unsure.
Next Text: Federal Judge's Decision On Health Law