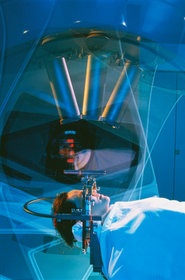 By Ashish B. Patel, MD

In radiation therapy, higher doses produce better tumor control. Yet doses typically must be fractionated in order to limit damage or risk to nearby healthy tissue.

Recently, stereotactic radiosurgery has moved beyond the brain into the body. At Abington Memorial Hospital, we now use stereotactic body radiosurgery—also known as stereotactic body radiation therapy, or SBRT—to treat some patients with inoperable early stage (T1, T2) lung cancer and certain spine metastases. These patients usually have co-morbidities such as significant heart or lung disease, or are otherwise too frail which precludes them from surgery.

While early stage lung cancer patients normally would be treated with an anatomical resection, those who are deemed medically inoperable traditionally have been offered conventional radiation therapy. Yet conventional radiotherapy produces a poor rate of primary tumor control for these patients, with a high rate of mortality at three years.

Noninvasive SBRT such as the technique used at Abington—which we call “surgery without the knife”—has been shown to produce significantly better tumor control in patients with inoperable early stage lung cancer than conventional radiation treatment.  A phase I/II study published in JAMA on March 17, 2010, from the Radiation Therapy Oncology Group (RTOG), showed that SBRT for patients with inoperable early stage lung cancer produced a 3-year primary tumor control rate of 97.6%—more than double the historical rates of 30% to 40% achieved with conventional radiation treatment.[i] Overall survival was 55.8%, compared with 20% to 35%.

Using radiosurgery in the body is more challenging than in the brain, due to the movement caused by patient respiration. With conventional radiation therapy in the lung and elsewhere in the body, margins delineating the radiation field would have to be set wide around tumors into adjacent normal tissues to adjust for the impact of breathing during treatment. These wide margins ensure that no matter how the lesions move, the target will receive adequate dose.

As a result, daily conventional radiation doses have to be kept low, to remain within safe thresholds for the healthy tissue situated within those margins. This means numerous treatment sessions, often as many as 30. Patients on longer treatment schedules tend to experience more side effects as therapy progresses, including significant fatigue, cough or pain on swallowing (depending upon tumor site) and skin irritation.

With stereotactic body radiosurgery, we are able to map the tumor precisely, stabilize and verify body positioning, comfortably restrict significant breathing motion and use a combination of diagnostic x-rays and cone beam CT scans to match planning and treatment position at the time of dose delivery.

Abington’s advanced linear accelerator has a sophisticated frameless coordinate system with imaging and treatment capabilities on board. The accelerator’s treatment table adjusts precisely, by millimeters, with great stability. With our new four-dimensional CT scanner, we are able to image the breathing cycle to see how the tumor moves as the patient breathes. This tumor trajectory information helps us be more accurate in setting margins for treatment, so we can significantly reduce the size of margins for a more precise target. In early stage lung cancer, we are able to reduce a typical 2.5 cm margin on tumor volume with conventional radiation treatment to 5mm with SBRT.

This precision allows higher doses be given, resulting in the need for only one to five treatment sessions. Because radiosurgery “ablates” the tumor with as many as10 to 20 beams positioned around the patient’s body, the dosage at skin level is also greatly lessened.  All of these advantages contribute to patients finding SBRT easier to tolerate than conventional radiation, with lower side effects.

As stereotactic body radiosurgery delivers high doses of radiation, it’s especially important to have a program set up for quality assurance, with a system of checks and balances, and a team well-trained in using the technology and techniques. Abington’s  highly skilled team includes physicians, therapists, dosimetrists and physicists who are expert in the  special planning, verification and treatment delivery procedures needed for SBRT.

Although the patients receiving stereotactic body radiosurgery are often not the healthiest, recently published research shows that this method offers them the possibility of increased local control benefits with lower risks than conventional radiation therapy. When surgery is not an option, that may be welcome news for them and their families.