Breaking News
Home / Headlines / Health Reform is Here: "This is what change looks like."

Health Reform is Here: "This is what change looks like." 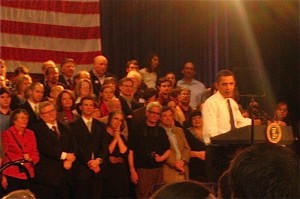 After a year of contentious debate, Congress has finally passed the health care reform bill, which provides coverage to 32 million currently uninsured Americans and regulates the insurance industry.

Just before midnight Sunday, the House passed the measure by a vote of 219 – 212, with unanimous opposition from the Republican party.  The bill required 216 votes for passage.  The House also passed a second piece of legislation, the reconciliation bill that made corrections to the Senate version, by a vote of 220 – 211.

After the session ended, President Obama gave a brief public address and said that the bill “isn’t radical reform. But it is major reform. This legislation will not fix everything that ails our health care system. But it moves us decisively in the right direction. This is what change looks like.”

The bill will now go back to the Senate for a procedural vote on the reconciliation changes approved last night and then to the President for him to sign into law.  There is a chance that Republicans may try to stall the bill in the Senate.

As Obama described the next steps: “On Tuesday, the Senate will take up revisions to this legislation that the House has embraced, and these are revisions that have strengthened this law and removed provisions that had no place in it. Some have predicted another siege of parliamentary maneuvering in order to delay adoption of these improvements. I hope that’s not the case.”

However, Obama’s former nemesis, Sen. John McCain (R-Nev) had different thoughts of the bill and its future.  McCain told ABC’s Good Morning America that Republicans “will challenge (the bill) every place we can.”  He called the bill “terribly wrong for America” and said that “outside the Beltway, the American people are very angry. They don’t like it and we’re going to repeal this.”

The bill will eventually affect just about every American by 2014 when fines will be imposed upon people who do not buy or have insurance.  For patients interested to know how the bill may affect or benefit them, refer them to this outline in the New York Times.  Also, you may be interested to read about ten immediate benefits of this bill that will take effect upon the President’s signature.

Now, for the docs.  How does the health reform bill affect physicians?  The consensus is that 32 million newly insured patients ultimately would result in more business for physician practices and hospitals.  However, it remains unknown just how much docs and hospitals will be paid.  The bill did not include any permanent remedy to the annual cuts to Medicare reimbursements.

The bill does include an incentive for only primary care docs to accept more Medicaid patients as it increases those reimbursements to equal Medicare.  But the crush of new patients combined with the uncertainty of those payment rates and the exclusion of specialists may lead to problems.

The American Medical Association announced its support of the passage of the bill.  But Dr. J. James Rohack, president of the AMA, included some caveats in his approval: “We will remain actively engaged to ensure that before Congress adjourns there are additional important changes to our health system that couldn’t be addressed in the reconciliation process, including repeal of the Medicare physician payment formula that threatens access to care for seniors and military families. Congress must also move immediately to correct problems with the Independent Payment Advisory Board. The current IPAB framework could result in misguided payment cuts that undermine access to care and destabilize health care delivery.”

The Texas Medical Association was less diplomatic in its opinion of the bill.  Dr. William Fleming, president of the TMA, said “”We are disappointed and saddened that Congress and President Obama would pass a half-baked Senate proposal and call it ‘Health System Reform.’ The bill is simply bad medicine for patients and the state of Texas.”

Dr. Lori Heim, president of the American Academy of Family Physicians, said “”Although this bill is not perfect, the AAFP consistently supported efforts to provide health insurance with a minimum package of benefits for all Americans; to deliver high quality, comprehensive, and preventive care in a patient-centered medical home; and to ensure people can see their personal physician when they need care.”

We will continue to provide updates of this historic legislation.  Meantime, tell us your opinions.  Discuss below with your colleagues how this bill may affect you, your patients, and your practice.