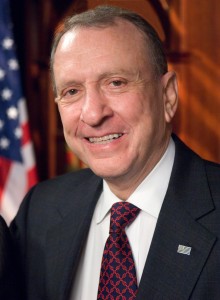 I was one of three Republicans who voted for the so-called moderates’ stimulus bill that virtually tripled the bill’s original funding for the National Institutes of Health and laid the groundwork for the shift to electronic medical record keeping.  Both carry broad implications for healthcare in Pennsylvania and beyond.

At my initiative, the stimulus bill boosted the amount budgeted for NIH from $3.5 billion to $10 billion.  Funneled through NIH’s nationwide network of research institutions, this money will support local economies by creating new jobs while improving public health by translating research discoveries into treatments and cures.

Quick, targeted research grants in the amount of $500,000 will address research and medical priorities while generating jobs. Investments in renovations, repairs and construction, and infrastructure will create even more good jobs through the NIH’s “multiplier effect.”

The stimulus will also expedite the revolution in information technology. The bill will invest $19 billion nationwide in the next five years to bring about the transition from paper to electronic records that will improve the quality of care and lower medical costs, which last year exceeded $8,000 for every man, woman and child in the country according to estimates of the National Health Statistics Group.

Studies predict a gain of as much as 30 percent in efficiency, mostly through reducing unnecessary tests and prescriptions, paperwork, and medical mistakes. I will work to ensure that physicians along with health insurers and patients benefit from these investments

The stimulus legislation calls for standards to be developed for the nationwide electronic exchange and use of patient health information by 2010. Much of the money will support IT infrastructure along with Medicare and Medicaid incentives to encourage doctors, hospitals, and other providers to switch to electronic record keeping. Special provisions will strengthen Federal laws to protect the privacy and security of patients’ electronic records.

The Congressional Budget Office estimates that 90 percent of doctors and 70 percent of hospitals will switch to certified electronic health records within the next decade. In turn, that will save the government more than $12 billion through reduced spending on Medicare, Medicaid and other programs.

I believe the stimulus investments in health information technology and biomedical research will have a profound impact on the future practice of medicine and I will work to make sure that patients and physicians share in the benefits this legislation provides.

Arlen Specter is a Republican senator from Pennsylvania.

2009-03-30
Brad Broker
Share
Previous How To Get Your Piece of the Stimulus Pie
Next Medical Groups keep an eye to the future: Flexible work options create a competitive advantage